Quantified Critique – Digital Technology and the Creation of Significance at Universities

Technology-inherent decisions, norms and scales are in the digital world, so it seems, not only firmly anchored, they are also experienced as given and unquestionable. Digital information systems measure and quantify our everyday life and how we “perform” at work and in sports. The newly formed valuation studies refer to the resulting creation of value and significance and to the fact that we “users” mostly feed in the data voluntarily. Verifiability, logging and a continuous inventory of life is meant to serve the purpose of comparability. Critics speak of a hierarchical sociometry and ultimately a naturalisation of social inequality. The session “Quantified Critique” wants to focus on the university, the very institution that should give space to the critique of “the digital”. Digital technology was and is an object of scientific research at universities, both in terms of technological development and critique. It is also part of the daily work of scholars and is used for the administration of research at universities, libraries, archives, is used in science communication and by research funds and politics. International standards, such as the impact factor (IF), are intended to make scientific achievements comparable and thus identify those whose research is worthy of funding. The session is dedicated to a special technology that has been increasingly implemented at universities in recent years. Scientists are encouraged to continuously record their so-called “output” in current research information systems (CRIS). The two internationally widespread systems “Pure” and “Symplectic” are owned by the two media groups Elsevier and Holtzbrinck Publishing. Together with other corporations, such as Clarivate, which owns the IF, they not only sell the universities services in the field of publishing (journals), but also increasingly software and key figures that they collect from the scientists entered information. The basis of the session is the research project “Portfolio & Showroom – Making Art Research Accessible”, which follows the “thinkering” model (Erkki Huhtamo). The investigation is carried out through an analysis of the scientific-political context and through a history of CRIS as well as the material, the code, data and the user interface. In the interdisciplinary collaboration of software developers, librarians, historians and psychologists, the project developed a methodology using empirical data, a comparative study of commercial CRIS and the findings from the experimental development of an alternative CRIS. Against this background, the session focuses on the critique of “the digital” (i.e. including metrics), which is increasingly becoming the basis of daily work and is discussed, for example, in the questioning of citation data as historiographical tools. * * * Caption: Haselwander (illustration), Szichna (lithography), Matthias Rudolph Toma (printer, publisher), "Der Mensch und sein Beruf": "Chemicker, Phisiker, Luftfahrer etc.", 1835–1841 (production), Wien Museum Inv.-Nr. 87005/79, CC0 (https://sammlung.wienmuseum.at/objekt/154844/) 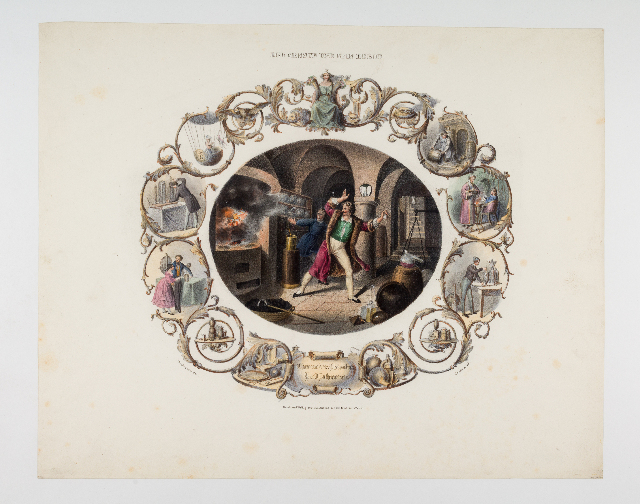