base Carousel is a display of artistic work that is located on the home page of base Angewandte. The various artworks appear randomly each time the page is accessed. Nine artworks are on display in the second edition of the base Carousel, which are dedicated to questions of translation, community, coexistence, voluntary or forced retreat, participation and economy. “Wahlverwandtschaften” are examined by the presented works in three main aspects: I Being human is often described by the sciences in contrast to the animal world, nature or the other. Three works depict that the boundaries between species, culture, nature and technology can be drawn less sharply. Benjamin Laabmayr creates a new lifeform with “scoby and i. a microorganism interferes” (2021) and reports on their encounters and everyday family life. Moritz Zangls “Stubsi, the fly” (2021) photographically captures the brief moment in which a housefly feasts on the artificial tear fluid of a person. With “Naked on Earth” (2021), Jessica Rosa is developing a technical device that examines her own body, its limitations and its interdisciplinary relationships. II The encounters with strangers, the spatial meeting of people and the brief moment of complicity are the focus of the next four works. In “Wahlverwandtschaften” (2021), Jekaterina Gaile gathers seven people, real and fictitious, who share the artist’s first name. Natascha Gerold assesses the sensual moment of encounters in “What does an elbow feel like?” (2021) and tries to capture and materialise it. In “Between” (2020), Miloš Vučićević throws the spotlight on a seemingly random gathering of people who seem spatially close, but linguistically far apart. And Marko Marković is relocating his performance “Mutual aid in self organized-societies. Music performance by Ausländer” (2021) in the semi-public space of the Angewandte and invites the bystanders to chance encounters. III Two works remain – in the best sense of the word – on the surface and examine what separates us from the outside, from the other and explore where our bodies begin or end. Christina Grüll makes latex copies of her skin, “Schnittstellen” (2021) remain as indexical symbols for life and the relationships it enters into. Mae Andreas Thomas Schwinghammer’s “das ist ein vorgriff” (2021) tells of the continuous configuration of our bodies in relation to one another, of the treatment of its surface as well as gender identities. Jury Quirin Babl, student Painting Florian Bettel, Cultural Studies Astrid Poyer, Art History Liddy Scheffknecht, Cultural Studies Eva Maria Stadler, Art and Knowledge Transfer Maria Ziegelböck, Applied Photography and Time-Based Media 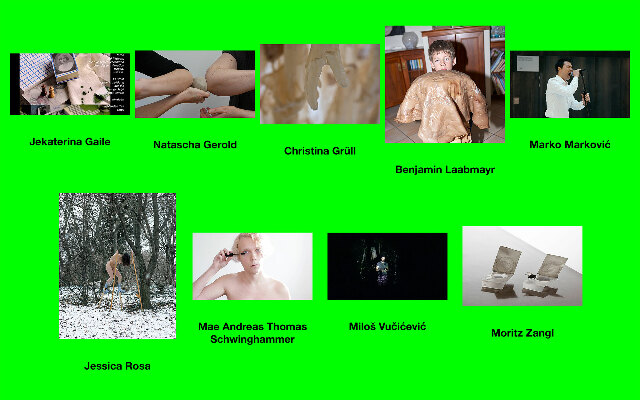