A remarkable movie derives from the silent film era, which envisioned an ideal production of film with the techniques the new medium offered. Published in 1914, the non-fictional “Die ideale Filmerzeugung” depicts and explains procedures in cinematography, from the physical treatment of film stock, the work behind and on camera, through to the dispatch of the final film copy—all accomplished without human labour but by the artefacts themselves. The film’s stop motion-animations depict a specific envision of an ideal filmmaking, which at that time and with the contemporary technology were not realistic. Most of the workflow in cinematography was manual labour, and therefore a highly sensual experience for the workers and the audience. This paper sets out the argument, that non-fictional movies from the early cinema can only be valid historical sources when they are recognised as a sensual medium. The conflation of knowledge on the history of film and the history of cinema, with know-how of film’s material qualities from film restoration, is the premise to tackle early cinema’s disparate body of source material. For this paper three significant vacancies in “Die ideale Filmerzeugung”’s depiction of the cinematographic process exemplify the specific sensual qualities of the medium: 1. The narrative does not incorporate the laborious craftsmanship, which was necessary in contemporary filmmaking. 2. The film ends right before depicting the projection of film—a major component of cinematography. 3. The “human factor” in the utilisation of technological artefacts is almost completely dis- missed. These three vacancies are examined, by including sensual experiences in the analysis that extend the visual (e.g. audible, olfactory)—thus enriching the historical source at hand. 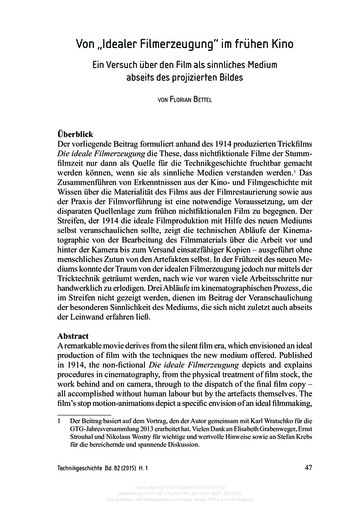