not defined yet, (preferably pinned on a pinboard)

I am in my studio room of my apartment. Its already dark outside. I have several lamps lit up while listening to the sound recording via headphone and later via speaker. It's a winterish Sunday. Its quiet. The sun did not show up today at all.

caption of the artifact of reflection: drawing on transparent paper, various pencils, one with pink colour (for charting the agency of voice), 297 x 420 mm // notes: I was listening to the sound recording in a loop for several times. I drew a circle which I intersected in 8 segments. Each round I charted new signs in relation to the sound file. Each round I focussed on the sound and reflected either with writing or with drawing. Frankly I found it rather difficult to hear the agency of voices as they are deeply embedded in the sounds of the city. Therefor I used two different colours. Pink for the human voices and grey pencils for all the other sounds. 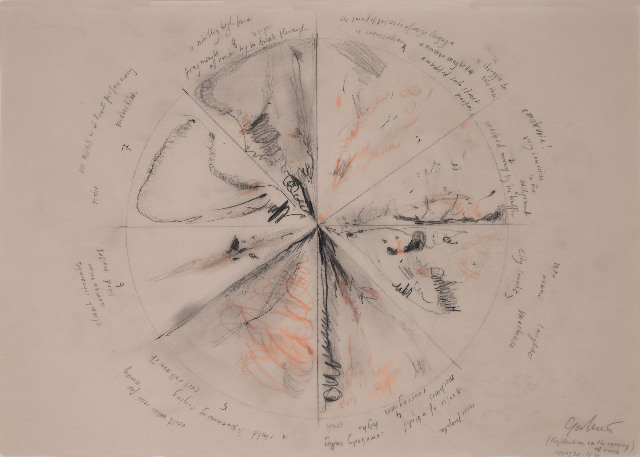